The Google WiFi system is a popular Home WiFi system (or Mesh Network) which was released in the fall of 2016.  In November 2017, our analysts found Google WiFi Black Friday deals with around a 13% discount on the set of 3 routers, which, at the time of writing was the lowest price for the past 12 months: 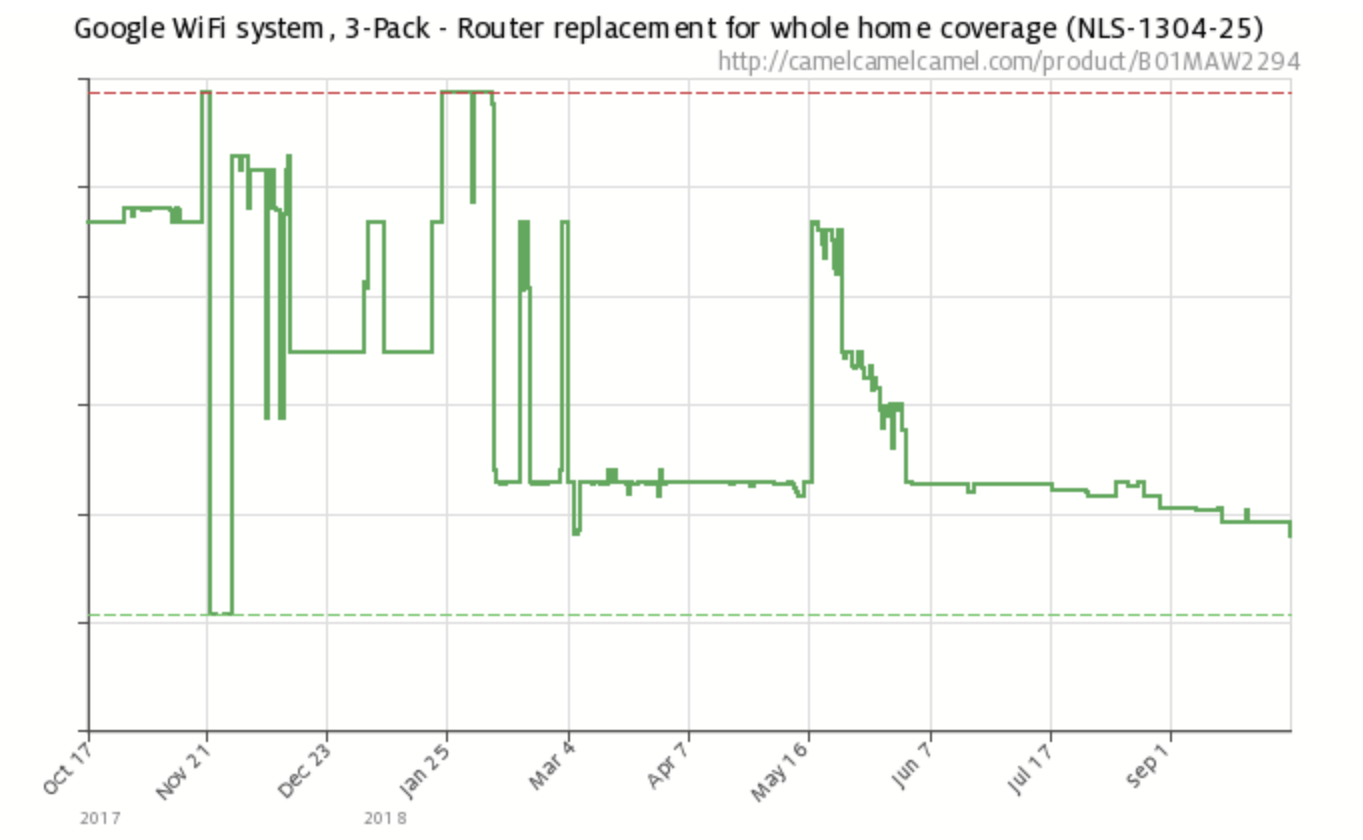 It’s important to note that Black Friday Google Wifi deals, (and in fact many other deals) can be misleading. Looking at the past 12 months on the Camel price tracker, our analysts found that the price of Google Wifi was raised to its highest price of the year on Nov 22nd, then lowered to the lowest price a day later on Nov 23rd.

The aim, of course, is to present a higher, but superficial percentage discount to make buyers feel like they’re getting a better Google WiFi Black Friday deal than they actually are. In this case, the mesh network was discounted during the deals period, but not by the percentage that they were led to believe.

The important thing here is to be informed. Yes, the discount is a little misleading, but if you’re looking to get the best price, then it’s still worth waiting to get the 3 pack Google Wifi deal on Black Friday, as we think this is most likely the cheapest time to buy.

Our research shows that similar to the 3 pack deal, there was a Google Wifi deal during the Black Friday and Cyber Monday period on the single unit which was somewhere in the region of a 30% discount from the initial release price: 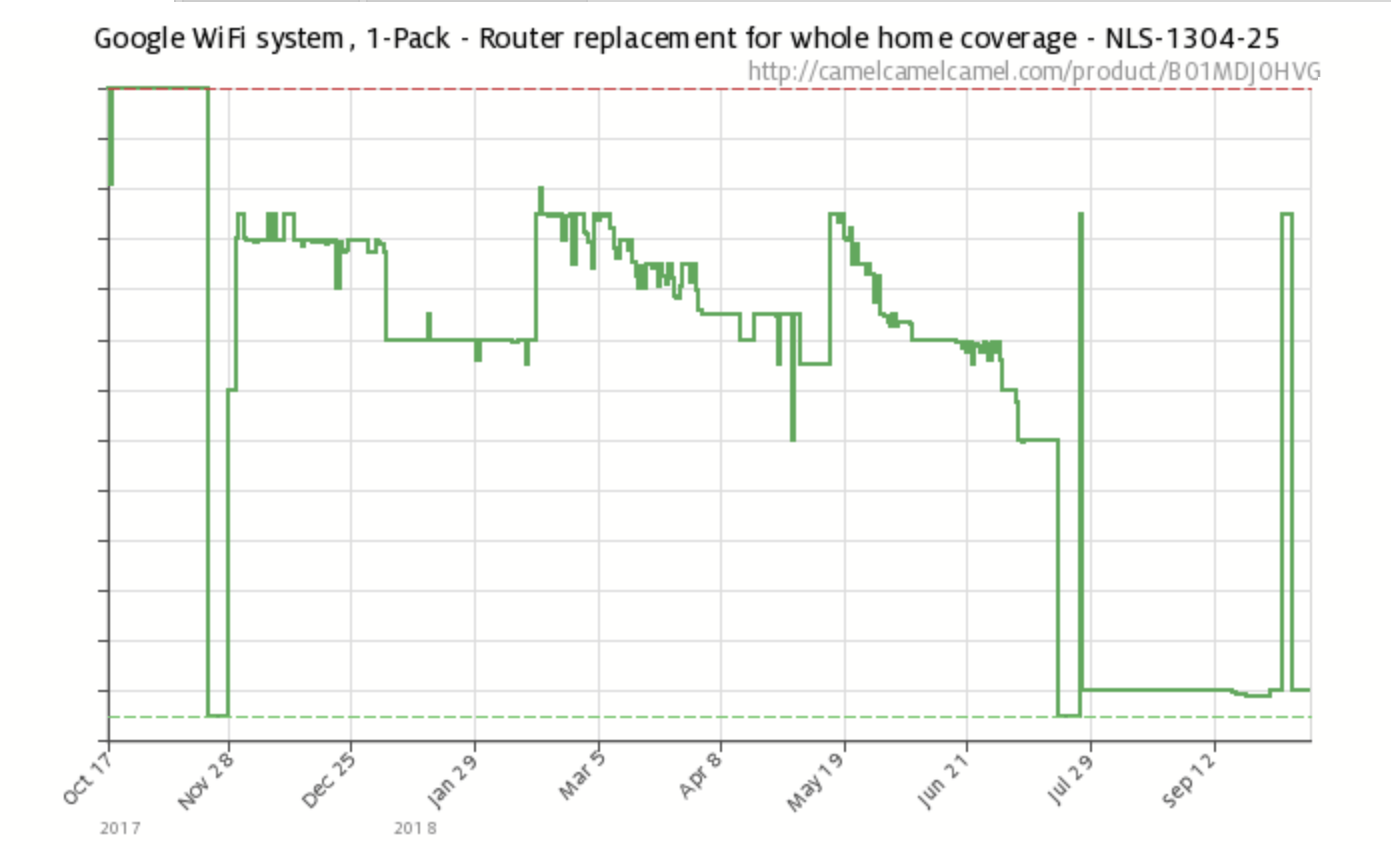 Again, however, it seems that the highest price recorded was just before Black Friday in 2016. Looking at more the price data, it seems that the lowest price recorded was actually during prime day 2018, but this could be due to other factors such as the product being on the market for a longer period. We are still expecting to see Google Wifi Black Friday and Cyber Monday deals on the single router, so stay tuned for discounts as we approach the deals period.

We’ll be monitoring the price changes and will be listing any Google WiFi Black Friday or Cyber Monday deals on this page.

Before you buy, you might be wondering:  What is a home WiFi System and do I need one?

It’s called a Home WiFi System because it’s made up of several identical routers which are placed throughout your home. Although they are identical, one of them is your one main router which plugs directly into your modem via the ethernet cable. The others you plug into a regular plug socket to spread your WiFi evenly around your home. Each unit can cover roughly 1200 – 1500 square feet of WiFi. Working together creates a mesh network of up to 5000 square feet!

Pro tip:
If you have the google OnHub, you just need to do a software update and it can also be used as an additional router! 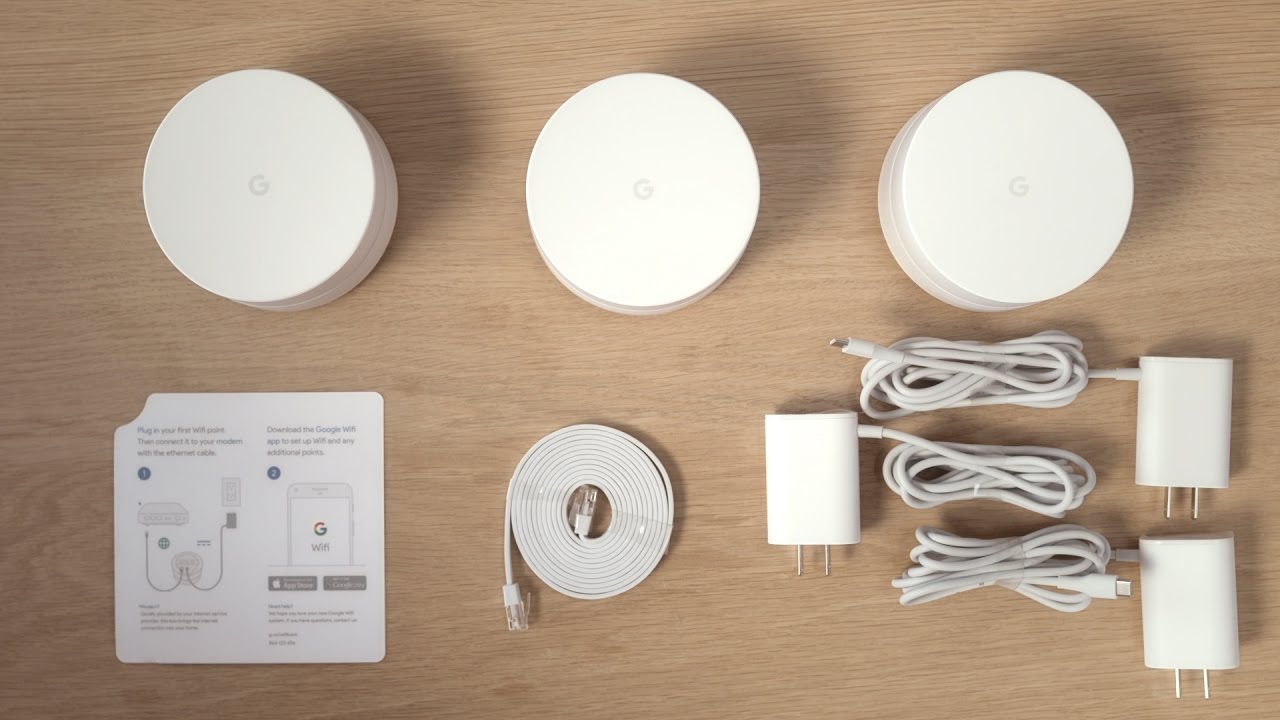 Sounds similar to other WiFi Systems, right? Let’s take a look at why Google WiFi system could be a good choice for Black Friday / Cyber Monday 2021

Is there an updated 2021 Google Wifi model?

The hardware in the Google WiFi model is the same as the original release although there are of course software updates that are made periodically. It’s still one of the most popular mesh networks available in 2018 and we think its a great choice if you’re looking to improve the range and consistency of your WiFi. If there are any updates to the Google Wifi product before Black Friday, we’ll update this page!

Google’s Home WIFI system is a popular mesh network that enables you to cover those tricky connection dead spots in your home. If you want to give your WiFi an upgrade before your family comes over for Christmas, Google Wifi is a great way to do it. Based on last year, we expect Google WiFi Black Friday and Cyber Monday deals to be released as we approach November and we expect this to be the cheapest price we’ll find all year. Check back here for updates, or post a comment below if you spot a good sale.